After studying this chapter, you should be able to:

• Describe normal anatomy of the female and male reproductive systems.

• Explain normal function of the female and male reproductive systems.

• Explain normal structure and function of the female breast.

Sexual development begins at conception, when the genetic sex is determined by union of an ovum and a sperm. During childhood, the sex organs are quiet.

Although genetic sex is determined at conception, the reproductive system of males and females is similar, or sexually undifferentiated, for the first 6 weeks of prenatal life. During the 7th week, differences between males and females appear in the internal structures. The external genitalia look similar until the 9th week, when these outer structures begin to change. Differentiation of the external sexual organs is complete at about 12 weeks.

During fetal life, ovaries and testes secrete their primary hormones, estrogen and testosterone, respectively. Testosterone causes development of male sex organs and external genitalia, and its absence results in female sex characteristics. Although estrogen is secreted by the fetal ovary, this hormone is not required to initiate development of female sex structures. The trend for prenatal sexual development is to have female structures unless a Y chromosome is present. If a critical part of the Y chromosome is absent, a female rather than a male will develop from the XY genetic makeup.

The sex glands of girls, as well as boys, are inactive during infancy and childhood. At sexual maturity, the hypothalamus stimulates the anterior pituitary gland to produce hormones that will stimulate sex hormone production by the gonads (reproductive or sex gland).

Puberty refers to the time during which the reproductive organs become fully functional. Puberty is not a single event but a series of changes occurring over several years during late childhood and early adolescence.

Some factors that initiate sexual maturation remain unknown. Secretions of the hypothalamus, the anterior pituitary, and the gonads all play a part. The hypothalamus is capable of secreting gonadotropin-releasing hormone (GnRH) to initiate puberty during infancy and early childhood, but it does not do so in significant amounts until late childhood. Production of even tiny quantities of sex hormones by a young child’s ovaries or testes inhibits secretions of the hypothalamus, avoiding premature onset of puberty. Maturation of another unknown brain area probably triggers the hypothalamus to initiate puberty (Hall, 2011; Jones, 2009b).

The maturing child’s hypothalamus gradually increases production of GnRH beginning at 9 to 12 years of age (Blackburn, 2013; Hall, 2011; Jones, 2009b, 2009c). The level of GnRH increases slowly until it is adequate to stimulate the anterior pituitary to increase its production of follicle-stimulating hormone (FSH) and luteinizing hormone (LH). The ovaries and testes increase production of sex hormones and begin maturing reproductive cells, or gametes, in response to higher levels of FSH and LH. The sex hormones also induce development of secondary sex characteristics (physical differences between mature males and females not directly related to reproduction). Table 11-1 presents the major hormones that play a role in reproduction. 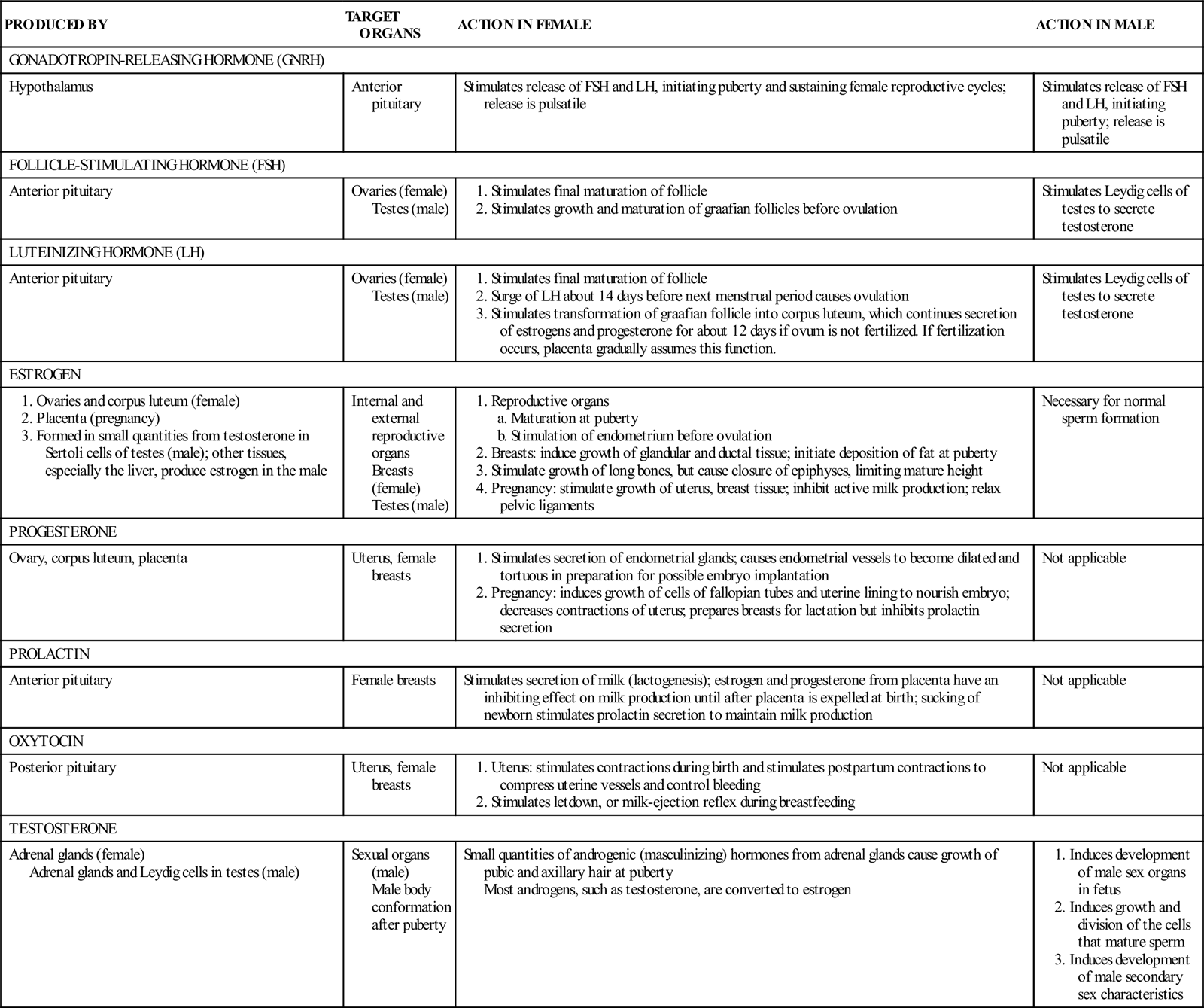 There is individual variation in the age at which the changes of puberty begin and the time required to complete these changes. Nutritional state can influence the start of puberty, with the well-nourished child having an earlier onset. Girls are approximately 6 months to 1 year younger than boys when hormonal changes of puberty begin, although a girl’s growth spurt early in puberty makes it seem that she begins puberty about 2 years before boys of the same age. Changes of puberty occur in an orderly sequence in both sexes. Increases in height and weight are dramatic during puberty but slow after puberty until the mature height and weight are attained. Table 11-2 lists secondary sex characteristics of males and females. (See Chapter 9 for detailed information about the changes of puberty.)

Comparison Of Secondary Sex Characteristics In Females And Males

As a girl matures, the anterior pituitary gland secretes increasing amounts of FSH and LH in response to the hypothalamic secretion of GnRH. These pituitary hormones stimulate secretion of estrogens and progesterone by the ovary, resulting in maturation of the reproductive organs and breasts and in development of secondary sex characteristics such as axillary and pubic hair. The first noticeable changes of puberty begin at about 8 to 13 years in girls with the development of breast buds. The first menstrual period occurs 2 to 2½ years later, with an average range from 9 to 16 years (Cromer, 2011).

The earliest outward changes of puberty occur in the breasts. First, the nipple enlarges and protrudes. The areola surrounding the nipple enlarges and becomes somewhat protuberant, although less so than the nipple. These changes are followed by growth of the glandular and ductal tissue. Fat is deposited in the breasts. During puberty, a girl’s breasts may develop at different rates, resulting in a temporary lopsided appearance.

The pelvis widens and assumes a rounded, basin-like shape that is favorable for passage of the fetus during childbirth. Fat is deposited selectively in the hips, giving them a rounder appearance than those of the male.

Pubic hair appears downy at first but becomes thicker as puberty progresses. Axillary hair appears near the time of menarche (menstrual onset). The texture and quantity of pubic and axillary hair vary among women and in different ethnic groups. Women of African descent usually have body hair that is coarser and curlier than that of white women. Asian women often have sparser body hair than women of other racial groups.

In response to estrogen stimulation, girls grow taller for several years during early puberty. The growth spurt begins about 1 year after initial breast development. Estrogen’s other powerful effect on the skeleton is to cause the epiphyses (growth areas of the bone) to unite with the shaft of the bones; this development eventually stops height growth.

The girl’s external genitalia enlarge as fat is deposited in the mons pubis, labia majora, and labia minora. The vagina, uterus, fallopian tubes, and ovaries grow larger. Vaginal mucosa changes, becoming more resistant to trauma and infection in preparation for sexual activity. Changes in the reproductive organs occur during each female reproductive cycle.

Early menstrual periods are often irregular and scant. Early menstrual cycles are not usually fertile because ovulation occurs inconsistently. Fertile reproductive cycles require preparation of the uterine lining precisely timed with ovulation. Ovulation may occur during any female reproductive cycle, however, including the first. The sexually active girl can conceive even before her first menstrual period.

Secretion of GnRH by the hypothalamus begins increasing as a boy enters puberty, stimulating secretion of LH and FSH from the anterior pituitary. LH and FSH then stimulate secretion of testosterone and eventually spermatogenesis, or formation of male gametes (sperm) in the testes. Testosterone stimulates development of a boy’s reproductive organs and secondary sex characteristics.

Growth of the Testes and Penis

The first outward evidence of male sexual maturation is growth of the testes between about 9½ and 17 years. Growth in circumference and lengthening of the penis follow about a year after testicular growth begins. The skin of the scrotum thins and darkens.

Often called “wet dreams,” nocturnal emissions are common during adolescence. The boy experiences a spontaneous ejaculation of seminal fluid during sleep, often accompanied by dreams with sexual content. Boys should be prepared for this normal occurrence so that they do not feel abnormal or ashamed.

Pubic hair growth begins at the base of the penis. Gradually the hair coarsens and spreads upward and in the midline of the abdomen. About 2 years later, axillary hair appears. Facial hair begins as a fine, downy mustache and progresses to the characteristic beard of the adult male. In most boys, chest hair develops, and some have hair on their upper backs. The amount and character of body hair vary among men of different racial groups, with Asian and Native American men often having less than white or Black or African-American men.

Testosterone causes a male to develop a greater muscle mass than a female. At maturity, a man’s muscle mass exceeds a woman’s by 50%.

Testosterone causes boys to undergo a rapid growth spurt, especially in height. A boy’s linear growth begins about a year later than a girl’s and lasts for a longer time, resulting in the male’s greater average height at maturity. Testosterone causes union of the epiphysis with the shaft of long bones, as does estrogen. The height-limiting effect of testosterone in the male is not as strong as that of estrogen in the female, so boys grow in stature for several years more than girls.

A boy’s shoulders broaden as his height increases. His pelvis assumes an upright shape, with a narrower diameter and heavier structure than the female’s.

Hypertrophy of the laryngeal mucosa and enlargement of the larynx cause the male’s voice to deepen. Before reaching the lower-pitched voice at maturity, many boys experience “cracking” or “squeaking” of their voices when they speak.

A woman’s ability to reproduce decreases over a period of years, called the climacteric, or the physical and emotional changes that occur at the end of the reproductive period. In most women the climacteric occurs between the ages of 45 and 50. At this time, maturation of ova and production of ovarian hormones decline. The external and internal reproductive organs atrophy somewhat as well. Menopause describes the final menstrual period. Menopause and climacteric, however, are often used interchangeably to describe the entire gradual process of change. Perimenopause is the time from onset of symptoms associated with the climacteric until at least 1 year after the last menstrual period.

Males do not experience a marker event like menopause. Their production of testosterone and sperm gradually declines, but men in their 50s, 60s, and beyond may still be able to father children.