Key Concepts and Steps in Quantitative and Qualitative Research

THE BUILDING BLOCKS OF RESEARCH

Research, like any discipline, has its own language—its own jargon—and that jargon can sometimes be intimidating. We readily admit that the jargon is abundant and can be confusing. Some research jargon used in nursing research has its roots in the social sciences but, sometimes, different terms are used in medical research. Also, some terms are used by both quantitative and qualitative researchers, but others are used mainly by one or the other group. Please bear with us as we cover key terms that you will likely encounter in the research literature.

The Faces and Places of Research

When researchers answer a question through disciplined research, they are doing a study (or an investigation). Studies with humans involve two sets of people: those who do the research and those who provide the information. In a quantitative study, the people being studied are called subjects or study participants, as shown in Table 3.1. In a qualitative study, the people cooperating in the study are called study participants or informants. The person who conducts the research is the researcher or investigator. Studies are often undertaken by a research team rather than by a single researcher. 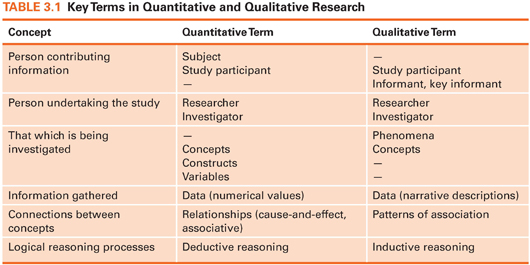 Research can be undertaken in a variety of settings (the types of place where information is gathered), like in hospitals, homes, or other community settings. A site is the specific location for the research—it could be an entire community (e.g., a Haitian neighborhood in Miami) or an institution (e.g., a clinic in Seattle). Researchers sometimes do multisite studies because the use of multiple sites offers a larger and often more diverse group of participants.

Research involves real-world problems, but studies are conceptualized in abstract terms. For example, pain, fatigue, and obesity are abstractions of human characteristics. These abstractions are called phenomena (especially in qualitative studies) or concepts.

Researchers sometimes use the term construct, which also refers to an abstraction, but often one that is deliberately invented (or constructed). For example, self-care in Orem’s model of health maintenance is a construct. The terms construct and concept are sometimes used interchangeably, but a construct often refers to a more complex abstraction than a concept.

A theory is an explanation of some aspect of reality. In a theory, concepts are knitted together into a coherent system to describe or explain some aspect of the world. Theories play a role in both quantitative and qualitative research. In a quantitative study, researchers often start with a theory and, using deductive reasoning, make predictions about how phenomena would behave in the real world if the theory were valid. The specific predictions are then tested. In qualitative studies, theory often is the product of the research: The investigators use information from study participants inductively to develop a theory rooted in the participants’ experiences.

In quantitative studies, concepts are usually called variables. A variable, as the name implies, is something that varies. Weight, anxiety, and fatigue are all variables—they vary from one person to another. Most human characteristics are variables. If everyone weighed 150 pounds, weight would not be a variable; it would be a constant. But it is precisely because people and conditions do vary that most research is conducted. Quantitative researchers seek to understand how or why things vary and to learn how differences in one variable relate to differences in another. For example, in lung cancer research, lung cancer is a variable because not everybody has this disease. Researchers have studied factors that might be linked to lung cancer, such as cigarette smoking. Smoking is also a variable because not everyone smokes. A variable, then, is any quality of a person, group, or situation that varies or takes on different values. Variables are the central building blocks of quantitative studies.

Variables are often inherent human traits, such as age or weight, but sometimes researchers create a variable. For example, if a researcher tests the effectiveness of patient-controlled analgesia compared to intramuscular analgesia in relieving pain after surgery, some patients would be given one type of analgesia, and some would receive the other. In the context of this study, method of pain management is a variable because different patients are given different analgesic methods.

Some variables take on a wide range of values that can be represented on a continuum (e.g., a person’s age or weight). Other variables take on only a few values; sometimes such variables convey quantitative information (e.g., number of children), but others simply involve placing people into categories (e.g., male, female, other; or blood type A, B, AB, or O).


Many outcomes have multiple causes or influences. If we were studying factors that influence people’s body mass index, the independent variables might be height, physical activity, and diet. And, two or more outcome variables may be of interest. For example, a researcher may compare two alternative dietary interventions in terms of participants’ weight, lipid profile, and self-esteem. It is common to design studies with multiple independent and dependent variables.

Example of independent and dependent variables

Independent variable: Volume of gray matter in the brain

The concepts of interest to researchers are abstractions, and researchers’ worldviews shape how those concepts are defined. A conceptual definition is the theoretical meaning of a concept. Researchers need to conceptually define even seemingly straightforward terms. A classic example is the concept of caring. Morse and colleagues (1990) examined how researchers and theorists defined caring and identified five categories of conceptual definitions: as a human trait, a moral imperative, an affect, an interpersonal relationship, and a therapeutic intervention. Researchers undertaking studies of caring need to clarify how they conceptualized it.

In qualitative studies, conceptual definitions of key phenomena may be a major end product, reflecting an intent to have the meaning of concepts defined by those being studied. In quantitative studies, however, researchers must define concepts at the outset because they must decide how the variables will be measured. An operational definition indicates what the researchers specifically must do to measure the concept and collect needed information.

Readers of research articles may not agree with how researchers conceptualized and operationalized variables. However, definitional precision is important in communicating what concepts mean within the context of the study.

Example of conceptual and operational definitions

Stoddard and colleagues (2015) studied the relationship between young adolescents’ hopeful future expectations on the one hand and bullying on the other. The researchers defined bullying conceptually as “intentional aggressive behaviors that are repetitive and impose a power imbalance between students who bully and students who are victimized” (p. 422). They operationalized bullying behavior by asking a set of 12 questions. One question asked how often in the past month did the study participant “say things about another student to make others laugh?” (p. 426). Participants were asked to respond on a scale from 0 (never) to 5 (five or more times).

Research data (singular, datum) are the pieces of information gathered in a study. In quantitative studies, researchers identify and define their variables and then collect relevant data from subjects. The actual values of the study variables constitute the data. Quantitative researchers collect primarily quantitative data—information in numeric form. For example, if we conducted a quantitative study in which a key variable was depression, we would need to measure how depressed participants were. We might ask, “Thinking about the past week, how depressed would you say you have been on a scale from 0 to 10, where 0 means ‘not at all’ and 10 means ‘the most possible’?” Box 3.1 presents quantitative data for three fictitious people. The subjects provided a number along the 0 to 10 continuum corresponding to their degree of depression—9 for subject 1 (a high level of depression), 0 for subject 2 (no depression), and 4 for subject 3 (little depression).

In quantitative studies, researchers are interested in the relationship between independent variables and outcomes. Relationships are often explicitly expressed in quantitative terms, such as more than or less than. For example, consider a person’s weight as our outcome variable. What variables are related to (associated with) a person’s weight? Some possibilities include height, caloric intake, and exercise. For each independent variable, we can make a prediction about its relationship to the outcome:

Exercise: The lower the amount of exercise, the greater will be the person’s weight.

Each statement expresses a predicted relationship between weight (the outcome) and a measurable independent variable. Most quantitative research is conducted to assess whether relationships exist among variables and to measure how strong the relationship is.


Only gold members can continue reading. Log In or Register to continue