Homeostasis and the respiratory system


Learning objectives
After studying this chapter, the reader will have an understanding of:

We live in an ever-changing environment but despite this, the body needs to maintain its internal environment within strict limits. The process by which the body maintains internal consistency (or internal equilibrium) is termed homeostasis (Chiras 2002). Respiration is one of the many body systems which are regulated by homeostatic processes. This chapter describes this process and gives an example of how it can be affected by ill health.

Blood pH needs to be held within a neutral range of approximately 7.35–7.45. A lower pH is too acid and a higher pH too alkaline. The body’s metabolism naturally produces acids, most of which are ultimately excreted by the kidneys. Carbon dioxide is produced by all cells as they make energy, and is also acidic. However, carbon dioxide is an acidic gas and so it is removed from the bloodstream by the lungs through breathing. The rate of carbon dioxide removal from the body is proportional to the volume of each breath (bigger breaths remove more carbon dioxide) and the respiratory rate (faster breathing removes more carbon dioxide).

Carbon dioxide dissolved in the blood regulates the respiratory rate

In a negative feedback mechanism, a stimulus causes a response which removes the original stimulus, thus ‘turning off’ the response. You will notice that raised carbon dioxide triggers an increase in respiratory rate, which decreases the amount of carbon dioxide, and the respiratory rate falls again. So, control of breathing by carbon dioxide is an example of a negative feedback mechanism. There are several causes of increased carbon dioxide production, such as exercise or severe sepsis. Negative feedback is a common mechanism used by the body to regulate itself and maintain homeostasis (Clancy and McVicar 2009). Other examples are the control of blood sugar through regulating insulin release from the pancreas and maintenance of blood pressure by regulating the heart rate. 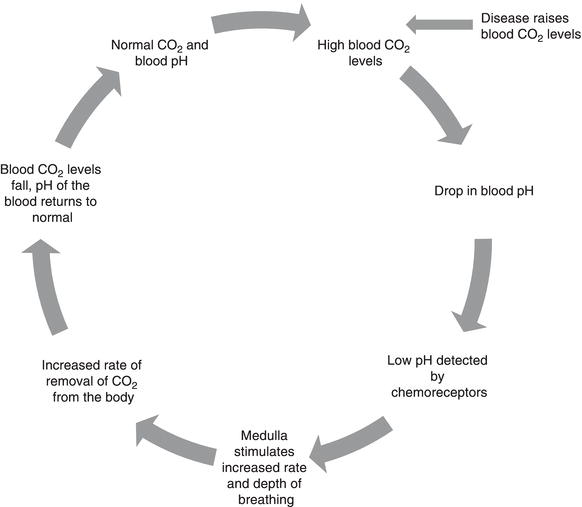