Assessment of defects in airflow and lung volume using spirometry

Learning objectives
After reading this chapter the reader will have an understanding of:

The respiratory assessment of a child is complex. It involves careful history taking, clinical evaluation and evaluation of pulmonary function when possible and indicated. In order to obtain a diagnosis, the presence of symptoms, pattern of illness and precipitating factors are very important.

The majority of children would develop symptoms of asthma in the first 5 years of life but diagnosis in infants is often difficult and many remain undiagnosed for long periods of time. A positive family history of asthma or atopy may help in early identification. It is always important to identify the frequency and onset of symptoms; further details will be discussed in Chapter 10. Asthma is ­seasonal, with symptoms being brought on by viral illnesses in winter and exposure to pollen and moulds in summer and autumn. In the older child, running or playing sports will bring on bouts of coughing and shortness of breath and a trial of β-agonists may be of benefit.

The majority of children will have intermittent symptoms, often with long periods of being ­completely well. However, in some chronically symptomatic patients, acute exacerbation may be punctuated by worsening of symptoms often requiring hospital admission.

Asthma is a clinical diagnosis but spirometry and other pulmonary function tests are very useful in establishing airflow obstruction and demonstrating evidence of reversibility.

The availability of portable spirometry has eclipsed the use of peak expiratory flow (PEF) mea­surement routinely for evaluation of airway obstruction. PEF is suboptimal as an investigation for evaluating airways obstruction and has poor reproducibility. There are no recognised reference values for many populations and PEF may underestimate airway obstruction, especially in ­muscular individuals. It should not be used on its own to diagnose asthma.

Pulmonary function tests are used to ascertain the severity of lung disease and trend changes in response to therapy. Asthma is defined by reversibility of airways obstruction and spirometry is particularly useful in demonstrating this effectively by the use of bronchodilators. It is a test which is increasingly recommended in children over 5 years of age. It should also be borne in mind that there may a discrepancy between the clinical severity of asthma and spirometry findings. It is also common practice to use spirometry for other respiratory conditions such as non-cystic fibrosis (CF) bronchiectasis, cystic fibrosis and primary cilary dyskinesia.

Forced vital capacity (FVC) is the total amount of air exhaled after maximal inspiration. Forced expiratory volume in 1 second (FEV1) is the volume of air exhaled in the first second and is the most commonly used respiratory function test (Cooper and Mitchell 2003; Cotes 1979). It has excellent repeatability and extensive information is available in normal as well as diseased states. Decline in FEV1 reflects reduction in total lung capacity, loss of lung recoil and muscle weakness. However, its most common use is in evaluating intrathoracic airways obstruction. It is also used to evaluate and monitor severity of airways obstruction over time (ATS 1995). Spirometry can be routinely considered in all children aged over 5 years although with suitable training, preschool children may be able to perform spirometry.

Airflow obstruction is defined as FEV1 of less than 80% of predicted value and FEV1/FVC ratio of less than 0.8 (80%) (Nunn 1987). There are reference values available based on race, age, height and sex. The majority of new spirometers are computer based and will produce the ratios automatically. FEV1/FVC is a sensitive measure of impairment but FEV1 is a better indicator of future worsening.

In obstructive disorders, e.g. asthma, FEV1, forced expiratory flow (FEF)25–75 (representing small airways) and peak expiratory flow rate (PEFR) are decreased. The FEF25–75 is a parameter which is not effort dependent and may be useful in mild symptom-free patients with normal FEV1. FVC is reduced in restrictive disorders, e.g. severe scoliosis. In severe restriction, FEV1/FVC ratio will be elevated over 85%. In extrathoracic obstruction a distinctive pattern in flow–volume curves will be seen with a ‘square box’ symmetrical pattern of maximum inspiratory and expiratory flow.

Modern medicine demands health and safety guidelines based on best practice and quality assurance measures. Practices such as spirometry also require safety mechanisms, so in order to record volumes of air inhaled and exhaled precisely, the spirometer needs to be calibrated and checked prior to each clinic, at 4-hourly intervals and if there is a change in the room temperature of 5°C, if practically possible (Education for Health 2005). In order to maintain such safe practices, the manufacturer’s instructions for calibration should be adhered to. Some spirometers allow adjustment of the calibration immediately, e.g. Fleisch pneumotachograph, whilst others require correction by an engineer.

Calibration is done by using a 1 L or 3 L syringe to pump air into the spirometer. The syringe also needs to provide an accurate measurement, the 1 L syringe being accurate to 5 mL and the 3 L syringe to 15 mL. Periodically, the syringe needs checking for leaks by pushing the pistol of the syringe whilst the outlet is occluded (Booker 2008). The calibration check is performed with the filters on, in case any resistance alters the figures, thus ensuring that the correct syringe volume is entered into the data. The calibration readings produced should be within 3% of the syringe volume. Spirometers which calculate the calibration accept a response in the range of 0.97–1.03 (3%) before prompting to update the calibration (Booker 2008).

Spirometers moved from building to building will need time to adjust to the new room temperature before the calibration check is done, because spirometers are sensitive to temperature. Ideally spirometry should be performed at 20–25°C but definitely in the range of 17–40°C (Education for Health 2005).

The syringe should also be kept with the spirometer to provide the same temperature and humidity. It should be kept away from direct heat and sunlight. Some spirometers require the temperature and barometer recordings to be entered, whilst others will have sensors which automatically gather the information (Booker 2008; Miller et al. 2005a).

A printout or written calibration results should be kept for future reference in case of discrepancies, which could potentially lead to inaccurate results. Also documentation of any repairs, servicing and updates of the spirometer should be kept, which is an important element of health and safety (Miller et al. 2005a,b).

Before asking the child to perform the test, it is always best to demonstrate the manoeuvre to ensure that they understand the procedure. Important measurements are required such as the child’s age, height and weight. The child should be preferably seated to limit movements. However, if the child prefers to stand then this is acceptable.

The process involved in spirometry testing will be discussed later in this chapter. Ideally a ­minimum of three manoeuvres is required. The success of the test relies on the skill of the person performing the test, as suggested by Cooper (2006). With flow–volume curves and/or volume–time curves being displayed on the screen, the best blows can be identified and poor blows excluded. Most spirometers have an incentive on the computer screen to optimise exhalation. This may take a few seconds. A clip may be put on to the nose to make sure that no air escapes from the nose. This process can be repeated to obtain the best result. Reproducibility (consistency) is important. Therefore during spirometry testing, it is important to continue to coach and cajole the patient with phrases such as ‘come on, keep blowing’, ‘don’t stop, keep blowing’.

There are five major criteria for accepting the test.

A child’s poor technique on inspiration/expiration may result from a lack of understanding of the procedure or boredom from performing repeated tests. Verbal encouragement and praising the child for their correct technique may help them succeed with further blows.

Goldman and Muers (1991) outline the associated problems with airflow, which occur with both inspiration and expiration. Essentially, the vocal cords constrict on inspiration, often referred to as ‘adduction’. The opening of the vocal cords then becomes smaller, restricting airflow into the ­trachea and lungs, causing difficulties with breathing.

When instructing a patient to do a flow–volume loop, it is important that the respiratory nurse has the experience to recognise abnormal sounds during the procedure and abnormal values when ­producing a report. It has been well documented that VCD can mimic and present with symptoms similar to bronchial asthma (Mobeireek et al. 1995). Therefore it is also necessary to save all the tests, especially the inspiration attempts, and to be aware of the medical history. Both the results and the history can assist in making a potential diagnosis and prevent long-term treatment for asthma (Mohiddin and Morris 2006).

Either an instrumental leak or air leaking from the mouth can be seen on the volume/time trace as a downward tilt. The correct positioning of the mouthpiece to prevent air leaks should be addressed during the procedure.

Some children will take a good breath in and then not blow straight away, causing a slow start to the test (Figure 5.1). A delay of 4–6 s or a slow inbreath may reduce the FEV1 and PEF results (Miller et al. 2005a). Therefore it is necessary to give encouragement to blow hard and fast immediately after a deep breath in. 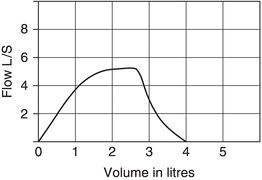 A wavy line appears on the trace when the patient coughs (Figure 5.2). If this occurs within the first second it should be discounted. Keep all the traces and obtain a good medical history. The patient will need adequate rest in between each blow. Abandon the tests if necessary.

Extra blows may occur with an enthusiastic child trying to obtain the best results, or a lack of understanding of the technique. Removing the mouthpiece before another breath is taken may help (Figure 5.3).

Early termination of the blow

The child may stop blowing too early (Figure 5.4). This sometimes occurs when the child is concentrating on the inspiratory part of the technique in flow–volume loops. Give encouragement until they cannot blow any more, and then ask them to breathe in. Young children may perform better if only the expiration trace is done. Early termination traces can still be used for the report.

Spirometry worsens with each effort

Spirometry is effort dependent and non-reproducible tests indicate variable effort (Figure 5.5). A forced blow may cause bronchospasm, with falling of the FEV1 and FVC. Overlapping traces help to detect this. In some children spirometry-induced bronchospasm will make each subsequent breath worse. In that situation, the first (best) test should be accepted. If this occurs, the testing is stopped and bronchodilators given if required or if needed for reversibility testing. The traces are labelled in time order. 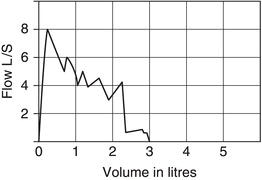 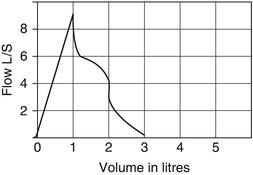 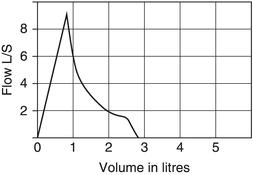 Figure 5.5 Spirometry worsens with each effort. 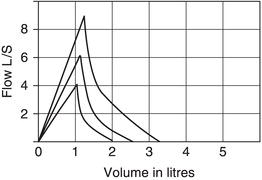