Anatomy and physiology of the respiratory system


Learning objectives
After studying this chapter, the reader will have an understanding of:

The function of the respiratory system is simple: to provide oxygenation to the blood and removal of carbon dioxide. In disease, the mechanisms allowing such gaseous exchange are impaired. Therefore knowledge of the physiology of the upper and lower respiratory structures allows an understanding of why impairment of ventilation and perfusion occurs in various disease states.

Anatomy of the upper respiratory tract

The respiratory tract begins at the tips of the nostrils (alae nasi), which are kept open by soft cartilage. Around the nostrils are the alar nasalis muscles which cause the nostrils to flare open during states of respiratory distress, and can reduce nasal airway resistance by up to 25% (Carlo et al. 1983). The nasal cartilage encloses the anterior nasal cavity called the nasal vestibule. The cells of the nasal vestibule are the same as skin and contain small hairs, vibrissae, which can help stop debris such as dust from entering. There is a large vascular capillary network in the anterior vestibule, commonly called Little’s area, which is a common site of nosebleeds in children.

A midline nasal septum divides the nasal cavity into two. On the lateral walls lie three curved turbinate bones called conchae, which direct airflow. Air passing through the nasal cavity is warmed and humidified and prevents the airways from drying out. Ventilator humidifiers do the same thing when the nose is bypassed by an orotracheal tube. This is the beginning of the nasopharynx, the site where nasopharyngeal aspirates are taken. The cells in this area are ciliated respiratory epithelial cells, rather than squamous cells, and move any particulate matter towards the oropharynx where it can be swallowed.

It is notable that the lacrimal ducts drain into the nasal conchae and the eustachian tube, that equalizes pressure in the middle ear. The adenoids are located near this region of the nasopharynx, and during viral upper respiratory tract infections adenoidal hypertrophy can block the eustachian tube in some infants and children which can lead to otitis media with effusion (Wright et al. 1998).

The naso- and oropharynx lead to the pharnyx where the epiglottis protects the laryngeal opening from the tracheal aspiration of food and liquids. During swallowing, the epiglottis moves down to close off the larynx. In epiglottitis, the epiglottis becomes very red and inflamed, swallowing becomes too painful, and the child drools. 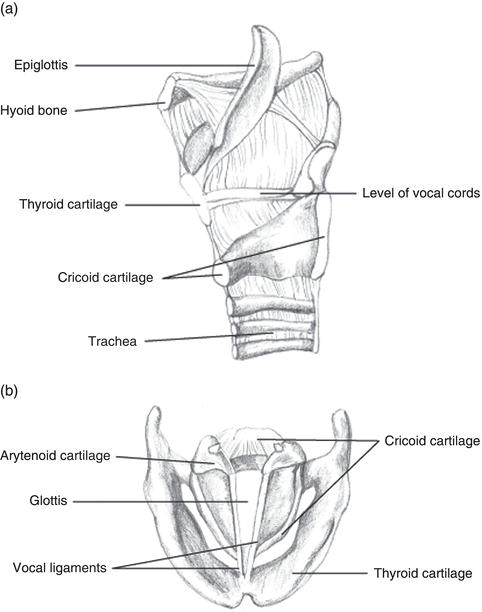 The larynx is a complex structure that contains ‘C’-shaped rings of cartilage and the vocal cords and muscles (Figure 1.1). The vocal cords and the space between them are commonly referred to as the glottis. Any abnormalities in this area will cause a variety of sounds, the most common being stridor. Below the vocal cords are the windpipe or trachea, which is part of the lower respiratory tract.

Anatomy of the lower respiratory tract

The trachea bifurcates at the carina to become the right and left main bronchi. The angles are slightly different, with the left main bronchi coming off at a more acute angle. Thus any inhaled foreign bodies tend to go down the right main bronchus. These bronchi then divide repeatedly into secondary and tertiary bronchi until finally dividing into the terminal bronchioles, respiratory bronchioles and finally alveoli.

The lung itself is covered by a pleural membrane which consists of the visceral and parietal pleura, with a small fluid-filled space in between. The visceral pleura covers the lung itself, while the parietal pleura is attached to the inner walls of the thorax. Infection and/or inflammation within the lung tissue can lead to accumulation of fluid or pus in this pleural space, respectively called a pleural effusion and empyema.

The work of breathing is done by the diaphragm and the intercostal muscles, located between the ribs. In poorly controlled respiratory conditions such as asthma, the diaphragm works much harder than usual and can deform the chest wall, as the muscle fibres attach to the lower part of the rib cage. This chronic deformity of the chest wall is called Harrison’s sulci.

The ability to describe surface locations on the chest is important, and is usually described in terms of ribs or intercostal spaces and vertical lines drawn from anatomical landmarks. The second rib is located first by feeling for the sternal angle, then moving laterally. Other ribs can then be identified by counting downwards. The important vertical lines are the midclavicular and midaxillary. The midclavicular line passes straight down from the middle of the clavicle and the midaxillary line passes straight down from the axilla, when looking at the patient side on. In pneumothorax, needle thoracocentesis is performed by inserting a butterfly needle or venflon into the second intercostal space in the midclavicular line. Emergency chest drains are inserted into the fifth intercostal space in the midaxillary line.

Development of the respiratory system

Congenital defects of the upper airway originate from abnormalities of the embryological pharyngeal arches. Six arches are formed in the ventral surface of the hindbrain during the fourth to fifth weeks of embryological development, and give the embryo a characteristic appearance. These arches are derived from mesenchymal cells. The first pharyngeal arch mainly forms the lower jaw and anterior tongue, and defects can present as the Pierre Robin sequence with micrognathia, cleft palate and glossoptosis. The second pharyngeal arch gives rise to the root of the tongue, as well as other structures in the neck. Such a difference in embryological origin explains why the different parts of the tongue are innervated by different cranial nerves. The epiglottis forms from the fourth arch. The larynx opens in the 10th week of gestation. Incomplete opening at this point can lead to a laryngeal web, which can present in infancy as stridor.


The trachea and lower respiratory tract develop in the fourth week from the outpouchings of the embryological foregut, and thus are derivatives of endoderm. Incomplete separation from the gut leads to the condition of tracheo-oesophageal fistula. The lung buds divide in the fifth week, with three main divisions in the right bud and two in the left. These will eventually correspond to the three lobes of the right lung and the two of the left. By the end of the fifth week the embryonic stage of lung development is finished.

The diaphragm forms in the 6th week and failure of fusion can result in herniation of abdominal contents into the thorax – congenital diaphragmatic hernia. The left side is most commonly affected.

Following on from the embryonic stage are stages of lung development (Table 1.1) (Scarpelli 1990). Before 24 weeks’ gestation, the lungs simply cannot function, even with exogenous surfactant. This stage of gestation is commonly seen as the limit of viability.

Changes in anatomy with age

In infancy, the narrowest point of the upper airway is the cricoid ring, rather than the vocal cords as in older children. Endotracheal intubation requires placing a suitably sized tube so as not to damage the vocal cords, whilst ensuring that any air leak is minimal. In younger children and infants the cricoid ring provides a seal, whereas in older children an endotracheal tube with an inflatable cuff is used. When the endotracheal tube passes through the vocal cords and is in the correct position, the cuff is inflated which creates a seal against the trachea and prevents air leak.

An important consideration in airway resistance is the change that occurs when the diameter is reduced due to mucus or inflammation. Poiseuille’s law states that airway resistance is inversely proportional to the fourth power of the airway radius (Figure 1.2). Thus a 1 mm change in airway diameter in an older child will have little effect on resistance compared to that of a newborn or infant (Balfour-Lynn and Davies 2006).

Physiology of the respiratory system

The function of the lung is to oxygenate the blood and remove carbon dioxide. Air at sea level contains 21% oxygen, with inert nitrogen making up the remainder. In order for the oxygen to be delivered to the blood, flow of air into the lung must occur. To accomplish this, a pressure gradient must be created between the terminal respiratory unit and the outside air. By contraction mainly of the diaphragm, against a thoracic cavity held rigid by the rib cage, a negative intrathoracic pressure is generated and flow of air occurs.

Figure 1.2 A similar amount of airway narrowing causes a much larger increase in airway resistance in smaller airways. Courtesy of Dr Phoebe Sneddon. 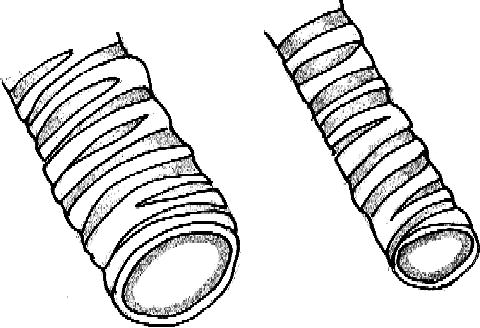