Learning objectives
After studying this chapter the reader will have an understanding of:

X-rays are a form of electromagnetic radiation with a very high frequency and short wavelength. This allows them to penetrate certain solid objects. The degree of penetration depends on the electron density of the object through which the x-rays pass. Bones are composed mainly of calcium, which absorbs a high percentage of the x-ray photons. Soft tissues allow much more of the x-rays through. This allows an image to be created when radiographic film is placed behind a subject.

It must be remembered that although very useful in diagnosing pathology, x-rays are ionising radiation and increase the chances of lymphoma in later life. As such, careful consideration of whether the investigation is really necessary must be made before ordering tests.

Just like shadows from a light source, the size of the radiographic image is dependent on the distance from the source of the x-rays to the subject, and then to the film. Even when these distances are optimised, the fact that the body is not flat means that the structures furthest from the film will be magnified to a degree.

In order to reduce this magnification effect on structures such as the heart, the usual practice in older children and adolescents is for them to stand upright with the front of their chest pressed against the x-ray film, with the x-rays passing through them from back to front. This standard type of chest x-ray is called a posteroanterior (PA) film.

In an anteroposterior (AP) film, the x-ray film is placed behind the patient’s back and x-rays are beamed from front to back. This is the type of chest x-ray performed in babies and young infants, and also in bed-bound children. As the heart is anterior, there will be a magnification effect which must be considered when assessing for cardiomegaly. Other views include the lateral view, which is not routine in the UK, and taking the image in different states of inspiration or expiration (which can help diagnose inhaled foreign bodies).

Images are stored in a picture archiving and communication system (PACS), which has replaced hard copy films. When accessing such a system, the process of querying the patient name and film has largely removed errors in assuming that the film you are looking at is indeed of the correct patient. However, it is still good practice when interpreting any x-ray to confirm that it is correct one.

Any obvious abnormality on the chest x-ray should be noted immediately. Once this is done, a structured method of interpretation should be followed, so as not to miss any subtle abnormalities. One common system (of many) involves checking the ABC before looking at the airways and lung fields.

A: adequacy, alignment and apparatus

Adequate exposure of the image relates to whether too much or too little radiation was used to create the x-ray (Figure 4.1). The intervertebral disc spaces are just visible when the correct exposure is used. They are not visible at all in an underexposed film. In an overexposed film, the disc spaces will be visible but the whole film will be very dark. The alignment is next assessed by looking for symmetry in the clavicles and anterior ribs. Any tubes, lines or drains should be commented on.

A quick survey of the bones is mandatory if healing fractures are not to be missed. Such fractures can be a sign of child abuse, or osteopenic bones.

The cardiac silhouette, cardiophrenic and costophrenic angles must be inspected. The cardiac silhouette (shadow) should be clear both right and left, and orientated towards the left (Figure 4.2). An indistinct shadow can be a sign of consolidation. An estimation of cardiac size can be made by measuring the cardiothoracic ratio, which is the ratio of the widest diameter of the heart shadow over the diameter of the chest at the same level. It should be less than 0.6 in children and less than 0.5 in an adult.

Loss of the normal costophrenic angle indicates a pleural effusion. Such effusions may be very large, and an ultrasound of the thorax is often required to distinguish an effusion from an empyema. The radiologist will place a mark or cross on the chest wall indicating a suitable position for a chest drain if a large effusion or empyema is found.

Figure 4.1 A 12-year-old boy with cystic fibrosis and bronchiectasis. Note the well-aligned, adequately exposed film. There is a portacath in situ, with the tip in the lower superior vena cava. A gastrostomy button can just be seen below the stomach bubble. There is hyperinflation and generalised marked bronchial wall thickening. 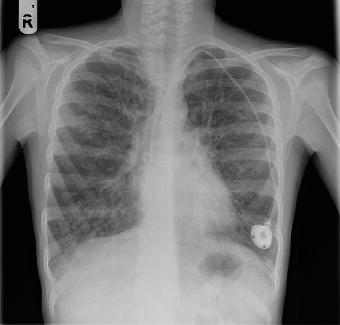 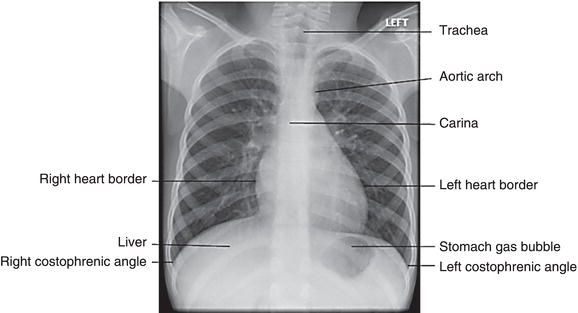 The chest x-ray findings in bacterial pneumonia vary from subtle patchiness or obliteration of a heart border to a white-out of an entire lung field. The x-ray changes are called consolidation and correspond to the accumulation of pus and inflammatory cells in and around the parenchyma of the lung (Figure 4.3). Thus in early pneumonia, before the immune system has had a chance to react, there can be little or no consolidation, even when clinical signs are present.

Figure 4.3 (a) Consolidation on the chest x-ray of a child with a right upper and middle lobe pneumococcal pneumonia. (b) Resolution 6 weeks later.

Figure 4.4 An intubated premature infant with a right-sided chest drain. Note the left-sided tension pneumothorax. A nasogastric tube is in the stomach. 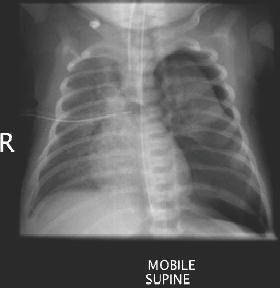 It can sometimes be very difficult to distinguish consolidation from the right upper lobe aspiration that commonly occurs in infants with acute bronchiolitis.

Chest x-rays taken of infants and children with air-trapping states such as bronchiolitis and asthma frequently show hyperinflation. This can be seen as an increase in the lung fields, with flattening of the diaphragm. Within the radiolucent lung field, at least 10 posterior ribs can be counted. The mediastinum is narrowed and a normal heart may appear small. 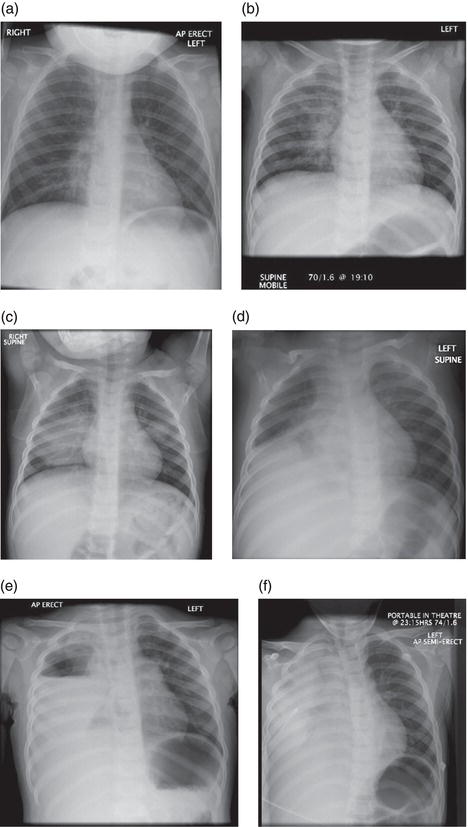 The lung is encased within the visceral pleura. The chest wall is lined by the parietal pleura. The space between contains a small amount of fluid which helps avoid friction during respiration. Air within the pleural space is called a pneumothorax and if enough is present, it can be seen on a chest x-ray. The air can enter either via the lung or from a penetrating chest injury. When enough air is in the pleural space, the mediastinum will deviate towards the opposite side, causing a tension pneumothorax (Figures 4.4, 4.5). Air under the diaphragm in an erect chest x-ray is seen with a perforated bowel.

Limitations of the plain chest x-ray

Each x-ray is two-dimensional. To help confirm if a shadow noticed on a plain PA chest x-ray is intrapulmonary or extrapulmonary, a lateral film can help. However, high-resolution computed tomography (HR-CT) scan can provide three-dimensional information, and at much higher resolution. This aids in confirming the location of pathology and provides much improved visualisation. Inflamed bronchi, for example, easily seen on HR-CT, are not easily seen on plain chest x-ray. The disadvantage is in the increased radiation dose, and in smaller children and infants, sedation is usually required.

Flexible bronchoscopy is a procedure whereby a flexible telescope is passed through the vocal cords into the lungs, usually under general anaesthetic. This procedure has been used for decades in adult patients, where it may be helpful in the diagnosis of lung cancer through biopsies performed with the aid of the bronchoscope. In recent years, the procedure has been used increasingly in children, to allow visual inspection of the airway, collection of samples by lavage (washing) the airway and occasionally biopsy (Midulla et al. 2003).

The arrangement of equipment and patient for flexible bronchoscopy is shown in Figure 4.6. The bronchoscope may be passed into the trachea, using a largyngeal mask airway (LMA) which sits above the vocal cords (Smyth et al. 1996) or a endotracheal tube which passes between the cords (see Figure 4.7). The bronchoscope must be disinfected in glutaraldehyde before and after each procedure. This must only be performed by suitably trained personnel and the cleaning must be done well in advance to allow the procedure to commence on time. 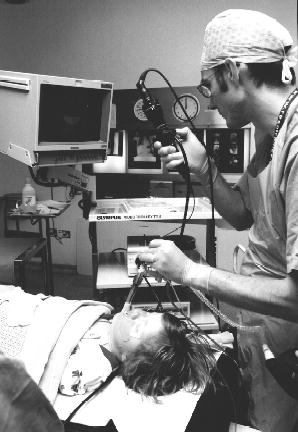